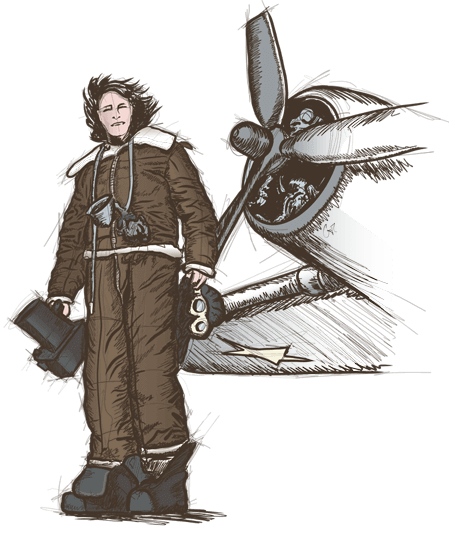 During WWII the United States and the allies faced a severe shortage of male pilots, so military leaders created a special unit called Women Airforce Service Pilots – WASP for short. Military leaders tasked these heroic fly girls, as they were known, to pilot all sorts of military aircraft, including B-26 and B-29 bombers, as part of their responsibilities.

They ferried planes over long distances, from factories to bases, and even across enemy lines without ammunition. They tested overhauled planes, and flew experimental machines. Most baffling of all, they towed targets behind them to give ground and air gunners training, shooting with live ammunition.

The history of the fly girls includes thousands of stories of bravery, courage and heroism. One that stands out involves Ireland’s Achill Island emigrant Nancy Corrigan, who became one of America’s most elite female aviators and the first woman to train male fighter pilots in World War II.

Nancy’s father, a railway worker, had died in a tragic train accident. Her mother, Maggie, was impoverished, and forced to raise four young daughters on her own. When Nancy turned 17, she moved to Cleveland, Ohio in pursuit of the American Dream. She understood that life in Ireland was hopeless.

During World War II the US Army recruited Nancy, and she became one of the first women to train male cadets at Spartan College, an aeronautics school in Oklahoma. She went on to compete in daring high-speed flying races, and even competed in the prestigious Kendall Trophy Race at the Cleveland Air Races in 1948.

Her trailblazing did not end there. Nancy became the first woman to lead the aviation department at Kansas University, in 1950. During the course of her long career, she earned virtually every aviation certificate available.

Nancy Corrigan was lucky — she survived the World War’s many challenging tests. But 38 WASPs lost their lives in the line of duty, 11 died during training, and 27 were killed during active duty missions. Unfortunately, since WASPs weren’t considered part of the military, families had to pay the expenses to bring their fallen girls back home for burial. In addition, none of them received military honors denoting heroism, such as the draping of American flags over coffins. Families could not even display service flags in their windows.

It is hard to believe, but WASPs were denied military status until the 1970s. In July of 2010, 65 years after their service, President Barack Obama signed a bill awarding them with this country’s highest honor, the Congressional Medal of Honor, for their invaluable service to the United States.

Were WASPs Hard Chaws? You bet — they capture the very essence of Hard Chaw.

Let’s toast the great WASPs with a round of Hard Chaw, a drink inspired by the strength and pride of Authentic Hard Chaws like the female pilots of World War II.