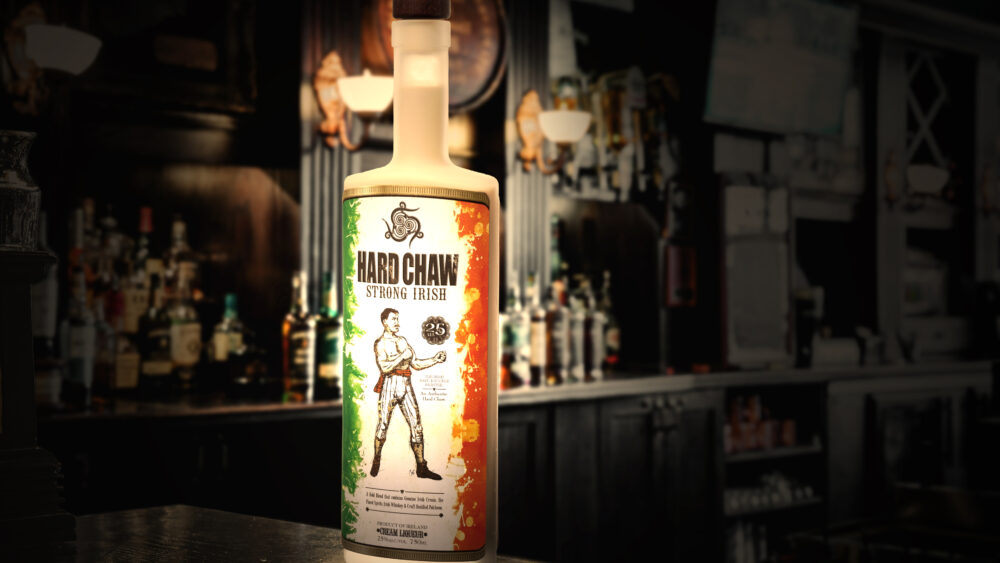 The world’s first strong Irish cream depends upon each of them for its exceptional flavor and its boozy oomph.

From the beginning Hard Chaw planned to take advantage of the pleasures of outstanding Irish whiskey. It is a vital part of the island’s history and culture, so central that the very word “whiskey” is an anglicized form of “uisce beatha,” which means “water of life” in Gaelic. 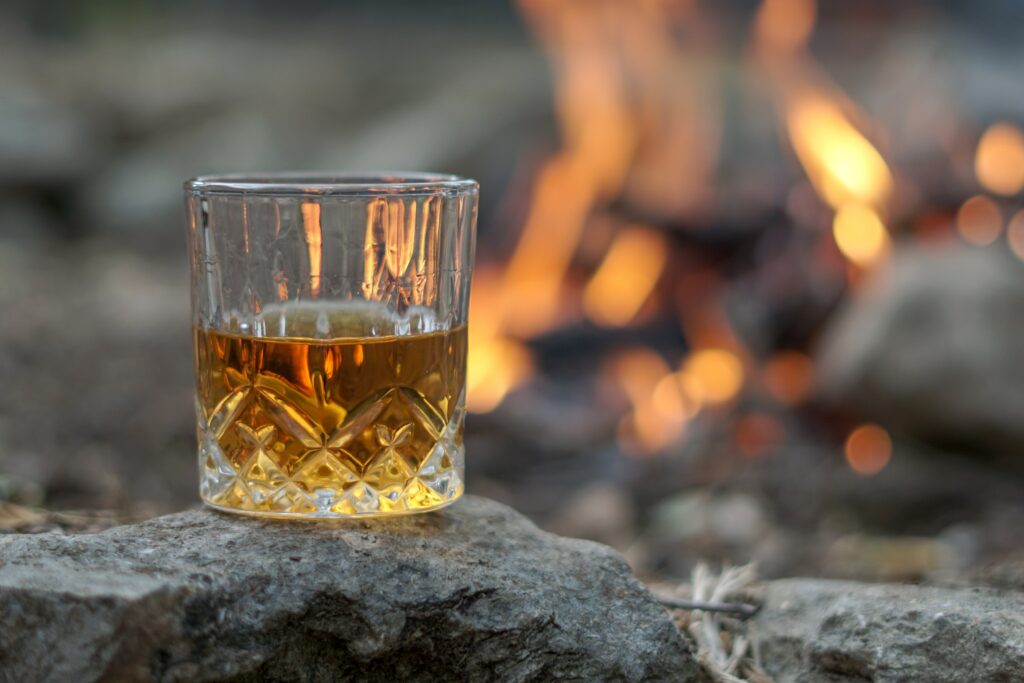 What is Irish whiskey?

Distillers in Ireland craft several different kinds of Irish whiskeys. Most of them involve barley as the grain, with Single Malt Irish Whiskey relying 100 percent upon barley and other styles combining barley with other grains.

One thing most of them share is triple distillation, a step that makes Irish whiskey especially smooth. Scotch, on the other hand, is normally distilled twice.

Irish whiskey is increasingly prized for its versatility and straightforward flavor.

Many Scotch’s are smoky from peat. Bourbons present more sweet notes than most whiskeys. But most (though not all) Irish whiskeys reject barley that has been smoked over peat. And Irish whiskey’s flavor doesn’t offer Bourbon’s sweetness.

How did the experiments of monks become Irish whiskey?

Potcheen, which we already have explored on the blog, was the precursor to Irish whiskey. 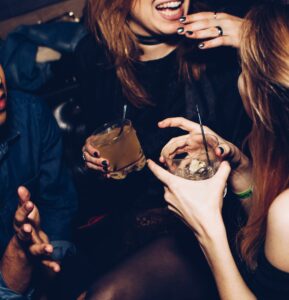 Holiday imbibing was a thing even 600 years ago.

Monks who learned the science and craft of distilling in the Middle East brought the technology to Ireland in the 6th century. In the Middle East the new technology was mainly used to manufacture perfume. But in Ireland monks used it to make the island’s first alcoholic beverage, potcheen, a simple spirit made from fermented grains and distilled using a single pot.

The first written reference to whiskey in Ireland is found in the 1405 Annals of Clonmacnoise. The document explains the death of a clan leader, saying he took “a surfeit of aqua vitae” at Christmas. It turns out that even 600 years ago, people imbibed too much during the holidays.

By the 1800s, Ireland not only was the biggest spirits market in the United Kingdom, but the largest spirits, producer, too. Dublin emerged as an international powerhouse, with its distilleries at one point making 10 million gallons of spirits a year. Back then, Ireland produced more spirits than any other country in the world. Irish whiskey’s reputation was sterling, and considered far superior to Scotch. 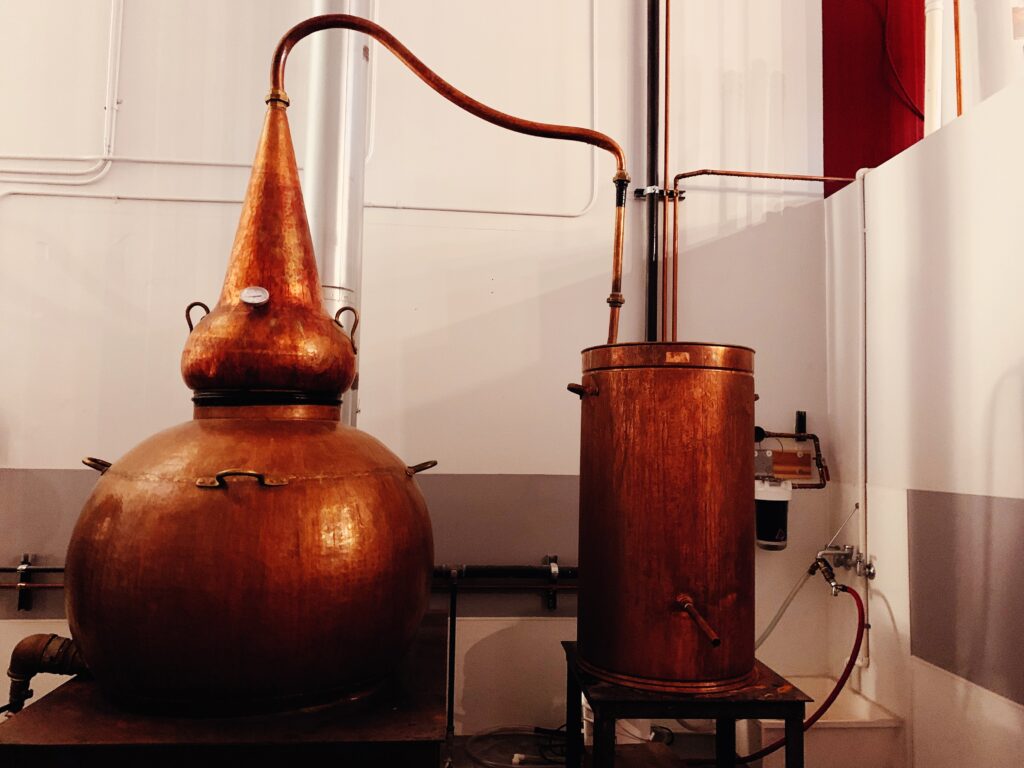 How an Irish invention nearly wiped out Irish whiskey

The main culprit for Irish whiskey’s decline was a new still invented by an Irishman in 1832.

The Coffey still, named after Aeneas Coffey, gave distillers the power to create far more spirits, in a shorter period of time, than with “pot stills,” which require crafting spirits in batches. Manufacturers could create spirits continuously, rather than in batches, with Coffey stills, which are commonly known as column stills. 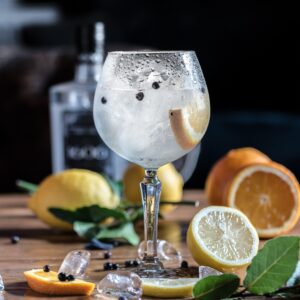 Coffey introduced his stills to Ireland first, using them in his own Dublin distillery and inviting others to embrace the new technology. Instead, they dismissed it. Coffey stills, they said, produce inferior Irish whiskey.

Frustrated with Ireland’s rejection of his innovation, Coffey offered the technology to Scottish whiskey and English gin distillers. They quickly welcomed the stills. And over time, spirits production in England and Scotland far surpassed the former international leader, Ireland.

The long story of Irish whiskey’s ups and downs involves many twists, including the Great Depression and prohibition in the United States. One of the more interesting tangents involves Ireland’s Great Famine of the 1840s.

For several decades prior to the famine, the “Corn Laws” prevented Britain and Ireland from importing cheap grains from other countries. But as the famine wreaked destruction across Ireland, lawmakers repealed the laws, in an effort to get food to the island’s suffering people. 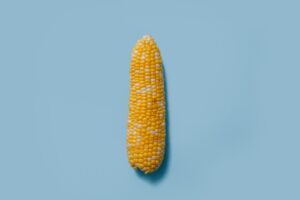 One of the results: The import of large amounts of cheap American corn, which manufacturers ran through Coffey stills to produce enormous quantities of neutral spirits. Distillers would then mix the neutral spirit with flavorful whiskey made in pot stills and aged in barrels, creating “blended whiskey.” The British went crazy for blended whiskey. Soon, it stole large significant market share from traditional pot-stilled Irish whiskey.

But Irish whiskey today is enjoying a profound renaissance, as entrepreneurs start new distilleries and established brands, like Jameson and Bushmills, prosper and grow.

Just three distilleries called Ireland home in 2013. Now there are 18, with another eight in the works, according to the Irish Food Board. 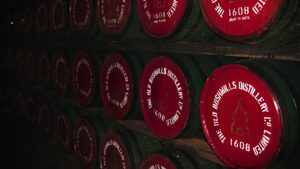 Irish whiskey is in the midst of an international renaissance, with strong growth.

Sales in the United States during the past five years, for example, grew by 61 percent. In 2018 alone sales of $1 billion represents growth of 9.4 percent compared to the previous year. Globally, sales jumped by 39 percent between 2013 and 2017, according to IWSR, the leading market research firm for spirits, wine and beer in the world.

Distillers ship Irish whiskey to 140 countries, and America is the biggest customer, consuming 43 percent of all sales. Among other things, research shows that millennials enjoy Irish whiskey. Its relative affordability compared to other whiskeys makes a difference, as well as its versatility.

We celebrate Irish whiskey at Hard Chaw, and are proud to include Ireland’s “water of life” in our formula for the world’s first strong Irish cream.